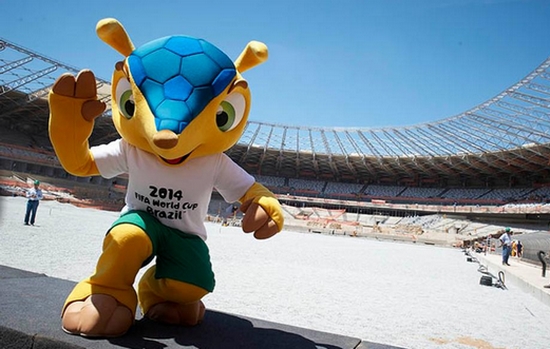 “Fuleco the Armadillo“that’s the name of the official mascot of the FIFA World Cup 2014 in Brazil. The Brazilian three-banded armadillo is native to Brazil where it is known as tatu-bola. It has a unique self-deface technique, when threatened; it rolls up into a tight, leathery ball that looks like a small soccer ball. It is on endangered species list and has suffered a 30% drop in population in the last decade. According to scientists it is threatened with extinction in the wild because of hunting, loss of habitat and even from the soccer tournament itself. 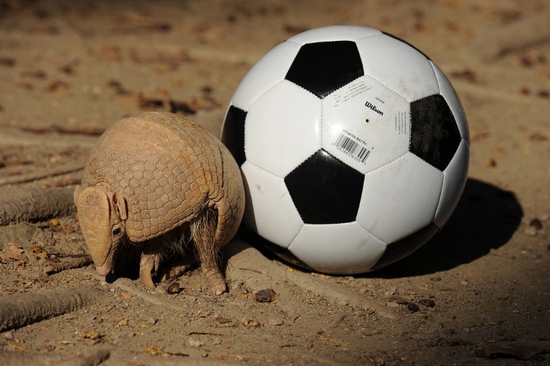 The name Fuleco is a fusion of two Portuguese words “Futebol” (“Football”) and “Ecologia” (“Ecology”).Research shows that the top terms used by the public to describe Fuleco are “Brazil,” ”nature,” ”friendly” and “passion for football.”
The cute Fuleco carries the colors of the Brazilian flag.it has a blue-and-yellow body, with green soccer short and a blue shell and tail. It is dressed in a white shirt with the words “Brasil 2014″on it. Fuleco’s blue body shell represents the sky and clear waters of Brazil. Fuleco were born on 1st January 2000, and was the very first Brazilian three-banded armadillo to be born in the new millennium. So it is 14 year old now. 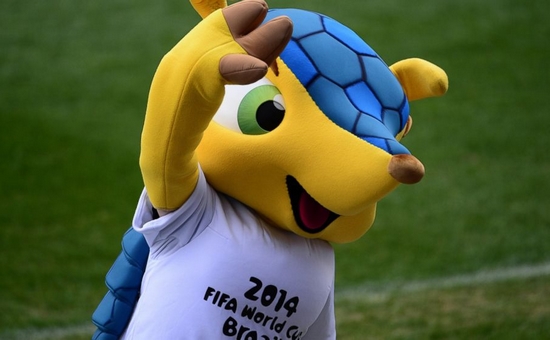 How the name, Fuleco, was chosen? It was put up to an online poll by FIFA World Cup sponsor Coca-Cola. 48 percent of 1.7 million, those who voted, chose the name Fuleco over Zuzeco(Azul – Blue and Ecologia – Ecology) and Amijubi (Amizade – Friendship and Júbilo – Joy) in three month long polling. The final mascot design was chosen by FIFA and the LOC from 47 different designs proposed by six different Brazilian agencies. Fuleco is one of the most popular FIFA World Cup mascots of all time, it likeness has been plastered everywhere. It is very famous among Brazilians over 89% Brazilians have seen the mascot within two days of its announcement.
However some Brazilians fans were not satisfied with the options picked for public voting, and demanded that organizers should have allowed fans to choose other names. Organizers said it wouldn’t have been possible to allow public to send suggestions because of legal complications like trademarks and other rights.