Pakistani skipper Misbah-ul-Haq commonly known as Mr. Tuk Tuk performed unbelievable when he knocked a hundred off just 56 balls. He equalizes the record of fastest hundred in test cricket ever. Misbah smashed 11 fours and 5 sixes in his brisk hundred at Abu Dhabi as he equalized West Indies legend, Viv Richards‘ record for the fastest ton. 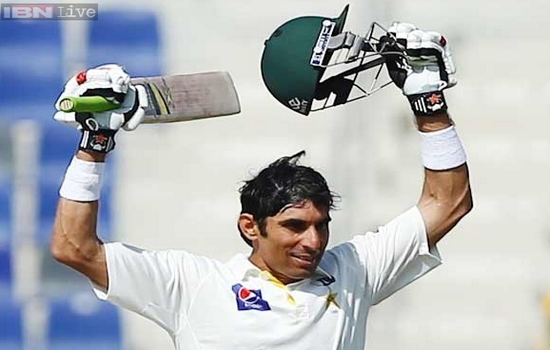 Test cricket is the slowest version of cricket. Nobody can expect that Misbah can score a century with a strike rate of about 200 at the age of 40. Misbah-ul-Haq is well known for his slow batting in all formats of cricket. That’s why he also named as Mr. Tuk Tuk. But at the moment he is enjoying the record of fastest century in test cricket at the age of 40…unbelievable… That’s why I believe in miracles. He also completed his fifty at just 21 balls that is also world record. Misbah is the 2nd Pakistani cricketer who entered the list of Top 10 All Time Fastest centuries in Test Cricket. The other one is Majid Khan who scored a hundred at just 74 balls against New Zealand at Karachi in 1976-77. Check out the full list of Top 10 All Time Fastest centuries in Test Cricket.

Fastest Centuries in Test Cricket (In Terms of Deliveries Faced)

Misbah scored century in 56 deliveries that is a record, he also got there in quick time – 74 minutes which is also a record. In terms of minutes, this was the second fastest century in Test cricket.

Fastest Centuries in Test Cricket (In Terms of Minutes)