Football is a game which was introduced to foster unity and promote togetherness. Football is a game of fair which should be devoid of violence, hooliganism and racial abuses. Football is a beautiful old game which calms down tension and pressure and also provides a source of happiness. Due to the competitive nature of the sports, sometimes people are led by their emotions to engaged in unsporting activities which brings the game of football into disrupt. Over the years football have developed and people have had emotional associations with football clubs to the extent that they are prepared to die for their clubs. Footballs over the few years have drawn conflicts among close friends and family members which should not have being so.

In this article, SportsGoogly discusses the top 5 football matches in Africa that have caused major deaths. Football disasters in the world are retrogressing due to major education about sportsmanship and the entertainment football presents. Stadium disasters and hooliganism are most common in Africa but does not cause lives in many circumstances. These are the top 5 matches is African football history that claimed a lot of lives. 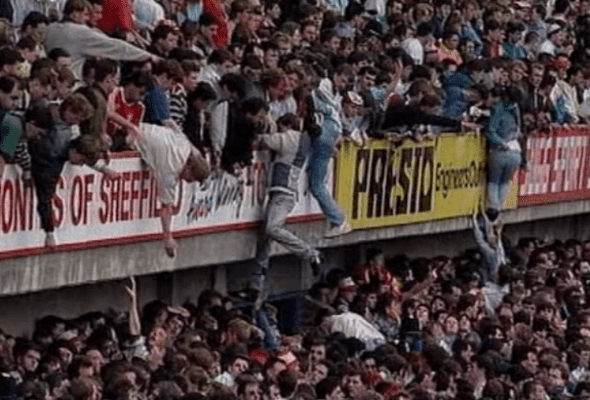 The disaster happened on 9 May 2001 at the Accra Sports Stadium during a league match between Accra Hearts of Oak and Kumasi Asante Kotoko. The two clubs are Ghana most successful football clubs. That day the stadium was filled to its capacity with the rival supporters. The away side Asante Kotoko was leading the game until the home team equalized. The games was about to end when the home side Accra Hearts of scored their second goal which majority of the Kotoko fans thought the goal was offside and should have been disallowed by the referee.

The supporters of Asante Kotoko threw plastic seats and bottles onto the pitch. The police reacted by firing plastic bullets into the angry supporters and also fired tear gas in to the crowd this caused panic and people tried to flee the stadium which caused stampede. At that time of the incident, some of the security and medical staff have already left the stadium and many of the exit games were locked.

127 people lost their lives in the stampede with a lot of people getting injured. This disaster is the worst stadium disaster in Africa. After the disaster a commission of inquiry was set up to investigate the incident. After the investigation the commission blamed the police for creating the panic at the stadium which lead to the death of 127 people. The commission banned the usage of tear gas and other offensive weapons from all stadiums in Ghana. May 9 every year is commemorated and a short ceremony is held to remember those who lost their lives in the worst disaster of African football.

The incident happened during a league game between Al Masry and Al Ahly on 1 February 2012. Al Masry won the game by 3 goals to one against Al Ahly. The match kick off was delayed thirty minutes because El Masry fans were on the pitch. During half-time and after each of the three second-half goals for Al Masry, the club’s supporters stormed the pitch, and at the conclusion of the match, thousands of spectators ran onto the playing field. Al Masry fans threw bottles and fireworks at the Al Ahly players, who fled to their changing rooms under police protection. The Masry fans were armed with stones and some carried knives. They attacked the Al Ahly fans, who tried to flee, but were unable to do so, as at least some of the stadium gates were locked.

74 people were killed. Some were stabbed and clubbed, while others were thrown off the stands or died in the stampede as they were trying to escape through a closed stadium gate in the back of the stands. At least 47 Al Masry fans were initially arrested and 73 eventually faced trial. The Egyptian army airlifted in soldiers by helicopter to rescue the players, who were stranded in their locker rooms. 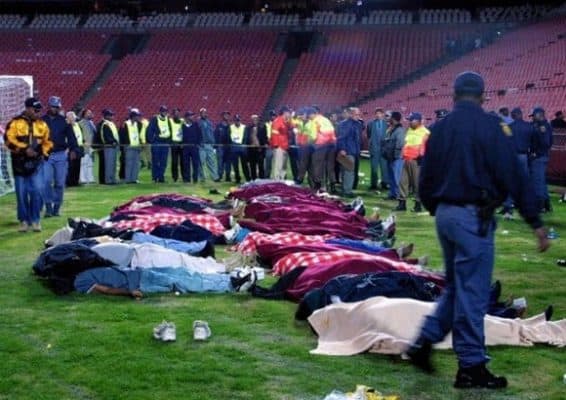 On 11 April 2001 the biggest sporting disaster in South African history occurred with Kaizer Chiefs playing a league game against Orlando Pirates at the Ellis Park Stadium in Johannesburg. Kaizer Chiefs and Orlando Pirates are all football clubs that originated from Soweto so any time they meet there is a bitter rivalry.

On that day there were already a 60,000 capacity crowd in the stadium, but reports suggest a further 30,000 fans were still trying to gain entry to the stadium. Reports also suggest that 120,000 fans were admitted into the stadium. An Orlando Pirates equalizer sparked a further surge by the fans trying to gain entry as they scrambled to see what had happened.As the crowd surged to gain seats and see the pitch, they over spilled into press boxes.

As the fans spilled into the stadium, is caused stampede and the police officers instead of controlling the crow fired tear gas into the stampeding crowed which eradicated the supporters to flee but is caused more disaster which claimed more lives than expected. After the security officials show the damage the opened the field for the injured people to come and seek medical attendance but it was already late leaving 43 people dead. An inquiry was commissioned to investigate the incident.

The final inquiry into the incident concluded that a major cause was bribed security personnel admitting fans without tickets into the stadium and poor crowd control. Again the commission also suggested that proper methods and checks need to be done to avoid over crowing in various stadiums. The Ellis Park Stadium disaster is the bloodiest football match disaster that has ever happened in South Africa.

According the Zamalek white knights (The supporters group of Zamalek) they claimed that they did not try to enter the stadium by force but rather they were waiting in a fence corridor outside the stadium waiting for their team Zamalek to in enter the stadium before they enter. The police game no warning and started firing tear gas in to them which caused stampede among the supporters leading to 28 people losing their lives.

The fact of the matter was not clear but one fact among the story was that tear gas was fired into the Zamalek fans outside the stadium which lead to 28 fans losing their lives.

On 11 May 2014 during a playoff match between Congolese football clubs TP Mazembe and Vita Club, missiles were thrown onto the pitch and the referee chose to delay play. The police were trying to restore sanity among the supporters but the supporters began to harass the police officers who then fired tear gas into the angry Vita Club supporters. The tear gas caused a stampede which leads some of the supporters to flee the stadium but the stadium wall collapsed which lead to the death of 15 people and 24 others who were critically injured. Suffocation was reported to have been the cause of death in most instances.

In total 286 people have died in 5 major football games in Africa since 2001. If football was intended for violence and rioting, then how many lives would it have claimed?  Football is a game of togetherness, friendship, unity and promotion of peace so why do we need to enemies and rivals for a peaceful game. Never again should football or any sport be the cause of a life lost. Football is a game and will continue to be a game so support your team with sportsmanship and remember that my game is fair play.