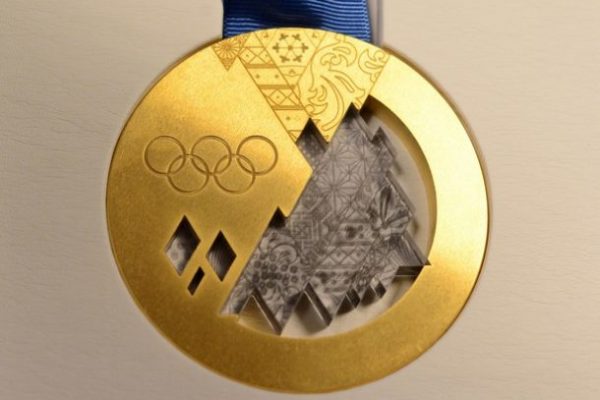 Medals have been awarded in various types of competitive activities especially athletics. Traditionally there are three types of medals; gold, silver and bronze.

These medals designate the first three Ages of Man in Greek mythology: the Golden Age, when man live among the gods, The Silver Age, where youth lasted a hundred years, and the Bronze Age, the era of heroes.

The prizes awarded at the Olympics have varied over their long history. Ancient Greek competitors were given an olive branch from a wild olive tree that grew at Olympia. The Olympic medals were awarded 1st time at the 1896 Summer Olympics. The winners received a silver medal while runner up received a bronze medal. In 1900, the trend shifted towed trophies and most winners received cups or trophies. The next Olympics (1904, 1908, and 1912) awarded the winners solids gold medals, but the size of medals was small. So the gold, silver and bronze medals awarding tradition in Olympics started since 1904 St. Louis Games.

How Much Gold is in a Gold Medal?

The 1912 Stockholm Games were the last time solid gold medals were awarded.  These days IOC required that the first place medals were silver gilt, containing “silver of at least 925-1000 grade and gilded with at least 6g of pure gold.” The second place silver medals must contain silver of a similar grade. Beyond that, the specific composition of the medals, and their design, is largely left to the host city’s organizing committee.

All Olympic medals must be at least 3 mm thick and at least 60 mm in diameter. Their design is largely left to the host city’s organizing committee. Sochi Olympics gold medals depict the landscape of Sochi, with the sun’s golden rays reflecting through a prism of snowy mountain tops onto the sandy beaches of the Black Sea coast.

Medals for the Rio Olympics 2016

The medals for the 2016 Olympic and Paralympic Games are of one of the most innovative designed medals.  They will be symbols of sustainability and accessibility as well as sporting excellence. These medals weigh 500g each. These comprise of 30 percent recycled silver and bronze while the ribbons are made from 50 per cent recycled PET. Meanwhile, the gold medals are completely free of mercury.

The Olympic medal design includes the traditional laurel leaf while the Paralympic prizes feature engravings representing the “seeds of courage, persistence and development of the athletes.” As is tradition, the reverse side of the medal displays an etching of Nike, the Greek goddess of victory.

How much is an Olympic gold medal actually worth?

The worth of the gold medal depends upon the worth of metals. As a gold medal contains just 6 grams of pure gold so it is not much worthy. For instance The Sochi gold medal weighs a total of 531 grams. Out of those 531 grams, only six are actual gold. The rest is made of silver. Using the current rates of both precious metals, the street value of a gold medal is approximately $595. So the value of gold medals depends the market value of gold and silver. It seems that the worth of gold medal is not so much but its importance is immense. It’s important because of its meaning and symbolism, not because it can be melted down to make a pair of moderately-priced earrings. It is a sign of prestige and honor.  It is the symbol of victory and integrity.

Besides gold medal most countries awarded bonuses to gold medals winners’ athletes.  According to AIPS the top five countries giving the most bonuses are:

Note: This data is collected after Sochi Olympics.