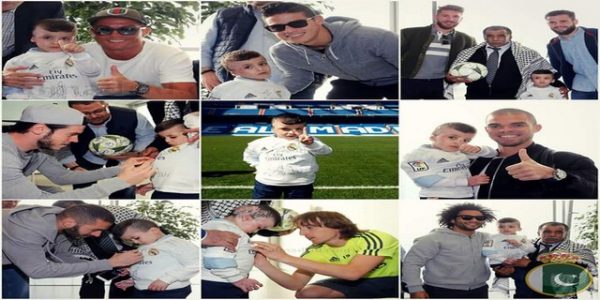 A great gesture from Real Madrid FC yet again. A young Palestinian boy who grieved a terrible loss was given the day of a lifetime by Real Madrid on Thursday. Ahmed Dawabsha lost his both parents in a bomb attack that blasted near his house in west bank. The blast not only took his parents away but Ahmed’s brother was also killed in the horrific incident. Ahmed was seriously injured and his body was badly burned.

When Real Madrid heard about the tragedy that struck 5-year-old Ahmed, they invited him to join the club in Madrid, giving him a chance to meet his heroes. On his arrival at Estadio Santiago Bernabeu Ahmed got some serious surprise when he realized that everyone, from Cristiano Ronaldo, to Marcelo, all the way down the club’s roster were ready to welcome and cheer him. Although the loss he suffered from is huge and no one can fill that gap, it was lovely gesture from Spanish giants to put a smile on the face of innocent boy.

Palestinian Football Association president Jibril Rajoub praised the efforts of Real Madrid and particularly Zinedine Zidane in these words: “There is an unknown soldier in this initiative and that is Zinedine Zidane, who we warmly thank.”