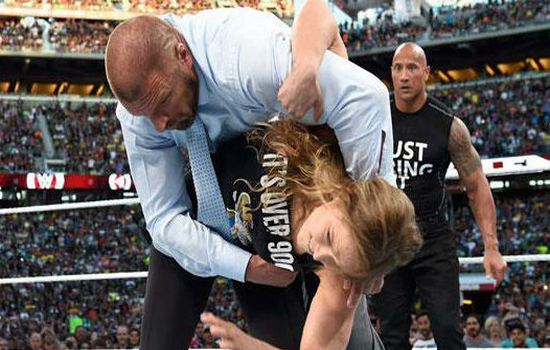 Earlier this year Rousey appeared in WWE ring along with Dwayne “The Rock” Johnson at WrestleMania 31 in April, and the former UFC champion helped tackle WWE executives Triple H and Stephanie McMahon.

Her appearance in WWE got a ton of publicity as she crossed over with WWE fans across the world, and fans have been clamoring for her to show up again in a professional wrestling ring. And there is a strong possibility that Rousey will make another appearance at WrestleMania 32 in Dallas. Her appearance in WrestleMania 32 not only satisfies the thirst of her fans but it is also a good chance to boost up her own moral after the stunning loss to Holly Holm in UFC 193. Anyhow Rousey is shooting a pair of movies in early 2006 before her comeback to professional wrestling.  At the moment she has a good point to celebrate that her appearance in WWE is recognized as one of the best moments of the year by WWE fans.