Shahid Khan Afridi Much Faster Than any Spinner 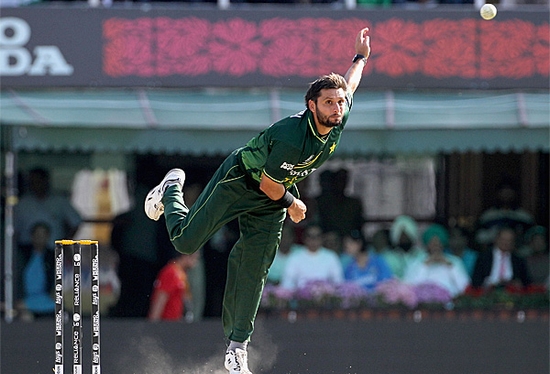 Shahid Khan Afridi, renowned by his hard hitting batting. Former world’s record holder of fastest century in ODIs has started his international career as a fast bowler. However after scoring the fastest century in his maiden ODI innings more was expected of him with the bat. While he is renowned for his aggressive batting, he is also a handy leg-spinner capable of producing a good mix of wicket taking balls.

Afridi decided to start bowling spin after he was told he was throwing. Apparently he has shifted toward spin bowling but actually his speed is much more than a normal spin. An average spinners has a speed of 80-90 Kmh. But Afridi’s normal deliveries are over 100 kmph. He has consistently bowled over 125 kmph.

His fastest delivery is 134 kmh against Tim Soothe of New Zealand in 3rd T20 match in 2010. At that delivery he also struck his wicket. That delivery is the fastest ever delivery bowled by the any spinner. It is a world record too.  As a spinner he bowls his faster delivery at almost 80 mph(128.7 kmph) in one game against South  Africa, his quicker delivery was quicker than Shaun  Pollock’s average speed, he also bowled a quick bouncer to Brian Lara in  2005 in West Indies and in second innings of Faisalabad test. He took the new ball as the match was heading towards a draw and consistently bowled at 130 kmph although with a non-coherent action.

He bowls at a high speed for a spinner, resulting in lesser turn, and relying more on variations in speed. He occasionally sends down a bouncer to a batsman, which is very rare for a spin bowler. He has picked over 375 wickets in One-day cricket. All these statistics indicate that he is much faster than any spinner. His aggressive nature, aptitude for fast bowling and physique makes all this possible.