Top 10 Most Strange and Weird Sports that Exist in Real

Sports are integral part of human life. Man has adopted many sports for his time-pass from the beginning of his history. Today,  sports are not only a mean of entertainment but they are professions. Now, sports are full developed industry. Many of them are so popular that they have million and billions of lovers and followers like soccer, football, cricket, tennis etc. still others are those which are not so much common but still they are playing in different parts of world. These weird sports are followed by many adventurous and audacious athletes. Here is the 10 most odd and weird sports that exist in real.

Most Strange and Weird Sports 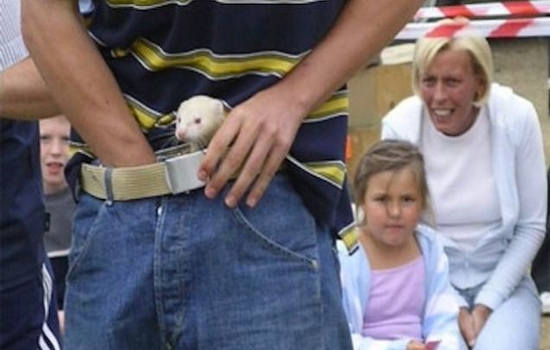 Ferret-legging is one of the weird and dangerous sports, in which ferrets are trapped in trousers worn by a participant. It is popular among coal miners in Yorkshire, England. Contestants put live ferrets inside their trousers; the winner is the one who is the last to release the animals. The world record is five hours and thirty minutes. In ferret-legging, competitors tie their trousers at the ankles before and securely fastening their belts to prevent the ferrets from escaping. Each competitor then stands in front of the judges for as long as he can. Competitors cannot be drunk or drugged, nor can the ferrets be sedated. Competitors are not allowed to wear underwear beneath their trousers, and the ferrets must have a full set of teeth that must not have been filed or otherwise blunted. The winner is the person who lasts the longest. 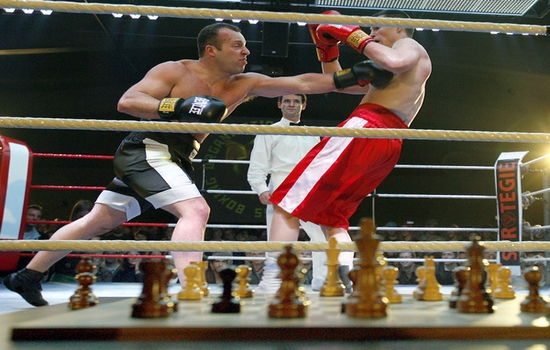 Chess boxing is a highly enjoyable and rewarding sport. It is a hybrid sport that combines chess with boxing in alternating rounds. A full match consists of eleven rounds: six rounds of chess, each three minutes long, and five rounds of boxing, each three minutes long. There is a one-minute break between each round, during which competitors cool out and change gear. Rules of fast chess are used, and a competitor only has a total of twelve minutes to use for all his chess moves. A competitor may win the match during a boxing round by knockout or a technical stoppage by the referee, by achieving a checkmate. If the chess game reaches a stalemate, the scores from the boxing rounds are used to determine the winner. So the competitor has equal opportunities to checkmate or knockout the opponent. 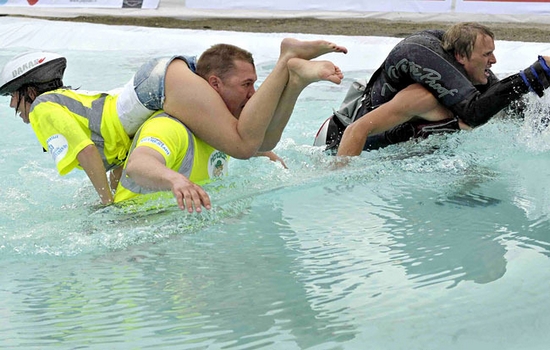 This sport is started at Sonkajärvi, Finland. It is one of the weird sports in which male competitors race while each carrying a female teammate. The objective is for the male to carry the female through a special obstacle track in the fastest time. Wife Carrying World Championships are held annually in Sonkajärvi, Finland since 1992. And the minimum weight of the wife to be carried is 49 kilograms. 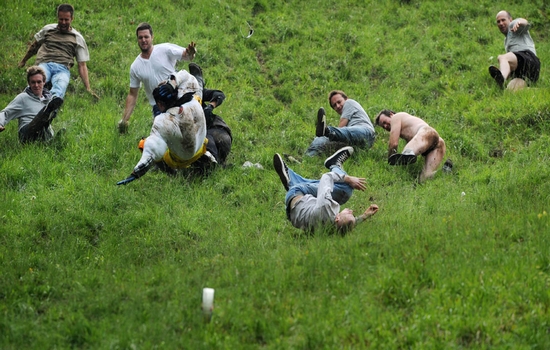 The Cooper’s Hill Cheese-Rolling and Wake is an annual event held on the Spring Bank Holiday at Cooper’s Hill, near Gloucester in England. In the beginning the event was for the people who live in the local village of Brockworth, but now people from all over the world take part.it is the world famous event according to The Guardian. A 9 lbs round Doubled Gloucester cheese is rolled from the top of the hill and competitors race down the hill after it. 1st person, who crossed the finish line at the bottom of the hill, is the winner. Injuries are common during the race. In the 2013 competition, a foam replica replaced the actual cheese to avoid injuries. The winner was given the prize after the competition. 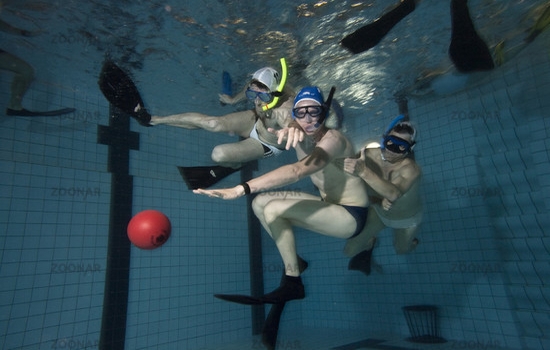 You have seen many matches of rugby in the ground but not in the swimming pool. Underwater rugby is weird kind of rugby that is played in a swimming pool. In particular game, two teams trying to gain the control of a buoyant ball filled with saltwater and passing it into a heavy metallic bucket serving as opponent’s goal. 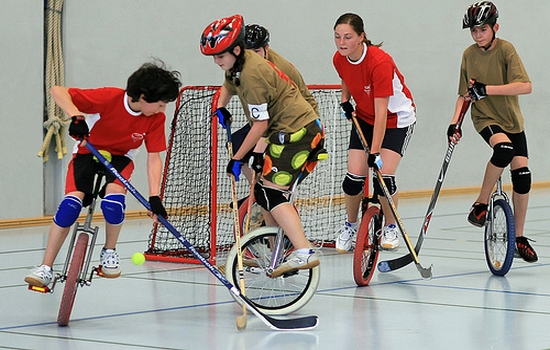 Another type of weird sports is unicycle hockey. It is a team sport, similar to roller or inline hockey, except that each player must be mounted on a unicycle to play the ball. A team is composed of five players but there is no dedicated goalkeeper role. The court used is between 35 and 45 meters in length, and 20 to 25 meters wide. Any stick that is legal for ice hockey can be used. The diameter of the wheel of cycle is 24 inches and usually a tennis ball is used. 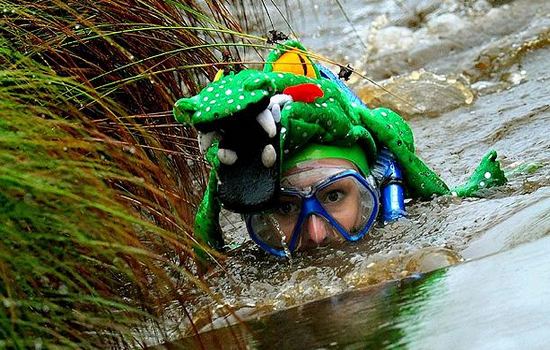 Bog snorkelling is another bizarre sporting event that consists of competitors completing two consecutive lengths of a water filled trench cut through a peat bog. The winner is the person who utilized the shortest time possible. Competitors must wear snorkels and flippers, and complete the course without using conventional swimming strokes, relying on flipper power alone. The World Bog Snorkelling Championship takes place annually every August Bank Holiday at the dense Waen Rhydd peat bog, nearLlanwrtyd Wells in mid Wales. 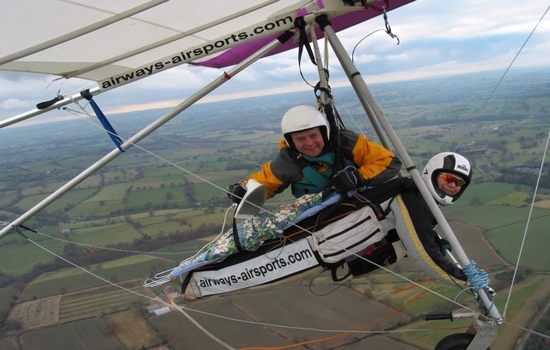 Extreme Ironing is the latest danger and extreme sport that combines the thrills of an extreme outdoor activity with the satisfaction of a well-pressed shirt. In this sport people take ironing boards to remote locations and iron items of clothing. The locations for such performances include a mountainside of a difficult climb; a forest; in a canoe; while skiing or snowboarding; on top of large bronze statues; in the middle of a street; underwater; in the middle of the M1 motorway; under the ice cover of a lake etc. 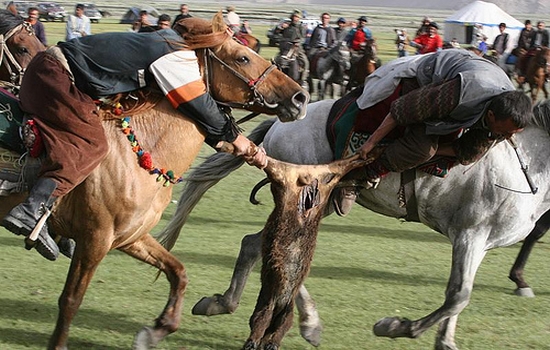 Buzkashī is the national game of Afghanistan. It is a rugged equestrian game, played predominantly by Turkic peoples in northern Afghanistan, in which riders compete to snatch and retain control of a goat or calf corpse. There are two main types of Buzkashi, Tudabarai and Qarajai. Tudabarai is relatively simple compared with Qarajai, even though they share similar objectives. In BUZKASHI, a headless carcass is placed in the center of a circle and surrounded by the players of two opposing teams. The object of the game is to get control of the carcass and bring it to the scoring area. 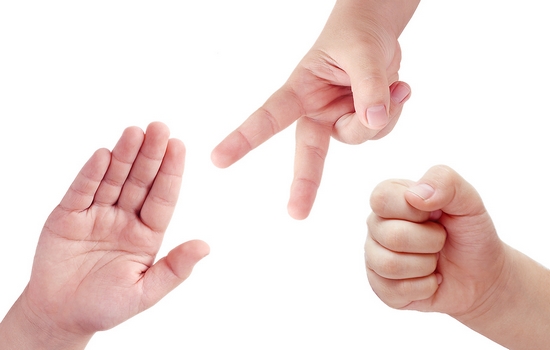 Rock-paper-scissors is a hand game usually played by two people, where players simultaneously form one of three shapes with an outstretched hand. The “rock” beats scissors, the “scissors” beat paper and the “paper” beats rock; if both players throw the same shape, the game is tied. In this game; Rock is represented by a clenched fist. Scissors is represented by two fingers extended and separated, sometimes coming together and Paper is represented by an open hand, with the fingers extended and touching, in order to represent a sheet of paper. The objective is to select a gesture which defeats that of the opponent. Gestures are resolved as follows:

If both players choose the same gesture, the game is tied and the players throw again.