How to Play Soccer? 17 Basic Rules of Soccer

There are 17 basic rules or laws to play soccer. There laws are designed to make game fun, safe and fair. These laws are easy to understand. 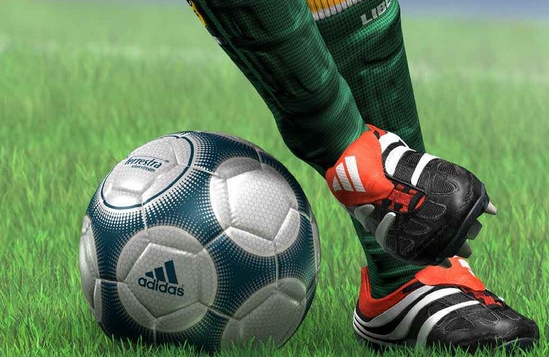 Objective: Basic objective of game is to get the ball into the opponent’s goal by using any part of the body except hands and arms. The goal keeper (goalie) is the only player allowed to touch the ball with hands and arms.

Referee: Referee is the person who is in charge the soccer game.  His main responsibility is to make the game interesting, safe and fair for everyone; players, officials and spectators.

The 17 world wide accepted basic rules of soccer are described below.

LAW1: The Field of Play: 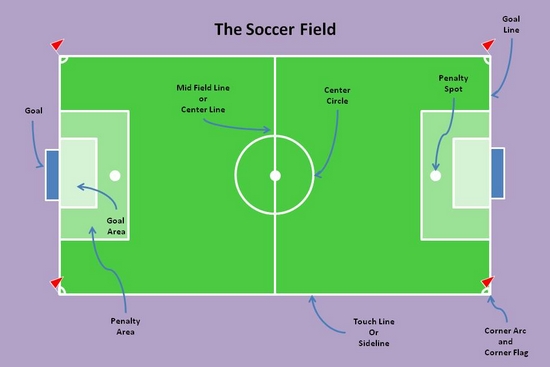 The size of the field varies from league to league; usually it depends upon the age of the players. For professional game the length must be between 100 yards and 130 yards and the width between 50 and 100 yards.

In soccer round ball is used having circumference is more than 28 inches (70 cm) and not less than 27 inches (68 cm). No. 5 ball is used for professional soccer, made up of leather or some suitable material.

Each match is played between two teams each having not more than 11 players and minimum numbers of players is 7.  One player from each team should be designated as goal keeper (goalie), he should wear different color shirt from his teammates so that he can easily distinguished from other payers.

The player’s basic equipment consists of jersey or shirt with sleeves, shorts, stocking shin guard and foot wear. A soccer cleat doesn’t have a cleat at the front edge of the shoes like a baseball cleat. Every team members must wear same color shirts.

The referee has full authority to enforce these 17 laws. He controls the match with the help of assistance referees. His decision is final.  He ensures that the ball and payer’s equipment meet the requirement. He acts as time keeper and stops play for violation of the laws. He may let play continue and call a foul if he /she thinks that stopping play would give an advantage to the team committing the foul. This is called the “advantage clause”.

Two linesmen may assist the referee in controlling game. The help referee in decision making. Carrying a flag to signal their observations, must monitor the sidelines and goal lines and flag if the ball goes out of the play, signaling which team the goal kick or throw-in should be awarded.  The linemen may also signal offside, fouls or misconduct if a goal has been scored or when substitution is required

The match duration consists of two halves of 45 minutes each. The time interval between two halves must not exceed 15 minutes. A referee may play added time because of substitutions, injuries and time wasted by any other cause.

A kick off is taken to start a game, to restart after a goal or to start the 2nd half and to start the extra time.  At kickoff time all players must be in their own half of the field. The ball is placed on the center spot in the middle of the center circle.  Which team will kick the ball is determine by a coin toss between the captains and the referee.

The ball is out of the play if it is completely outside the outside the touchline or the goal line either on the ground or in the air. It is also out of play when referee has stopped the game for any reason. The ball is in play if any part of the ball is inside or touching the touchline or goal line.it is also considered in play after bouncing off of a goal post, cross bar, corner flag, linesman or referee if the ball  remains in the playing field.

A goal is scored when the whole ball crosses the whole of the goal line between the goal posts and crossbar while it is in play, provided there is no infringement such as offside, a foul or handball.  Any player may score goal including goal keeper. Except when taking a free kick, throw in, goal kick, penalty kick of kick off. A ball played by a player into his own goal is a score for the opponent team.

A player is said to be off side if has not more than two opponents including the goalkeeper between himself and the goal line at the moment the ball is passed to him. There is difference between offside and offside position.

Offside Position: A player is said to be offside position if he is ahead of the ball, in the opponent half of the field and there are fewer than two opponents even with or ahead of him.

There are two kinds of misconduct

(i) Yellow card: When an action results in a caution from the referee. A referee may     warn a player to improve this conduct before a yellow card is issued.

(ii) Red card: In this situation the player is ejected from the game. Referee has the authority to red card coaches and spectators as well.

It either direct or indirect and the ball must be stationary when it is kicked. The kicker must mot touch the ball again until it has touched by another player.

Direct free Kick: On a direct kick ball may be kicked directly into the goal for a score. The direct kick is taken at the spot where the foul occurred, unless it is within the penalty box. Then penalty kick is awarded.

Indirect free Kick: A goal can only be scored if the ball touched any one or more players from either team, after it is kicked into play and before enter into the goal.

A penalty Kick is awarded when a defender committed a major foul in penalty kick  area, the team that was fouled is given a penalty mark. All players except goalie remain outside the penalty area and penalty arc until the kick is taken. The defending goalkeeper has to stand on the goal line and not allowed to move until kick has been taken. It is always taken in forward direction and kick cannot touch ball again until another player has touch the ball.

Goal area is the box located directly in front of the goal. When the attaching team last touches the ball before it crosses over the goal line, the defending team is awarded with a goal kick. The goal kick is taken by any player on the defending team. During this occasion the opposing team must stay out of the penalty area until ball completely leaves the goal area.  The kicker may not play the ball again until another player has played it.

If a ball crosses the goal line and is last touched by the defending team, the attacking team is awarded a corner kick. It is taken from the within the corner arc on the side of the field where the ball went out the play. The kicker is allowed to score a goal by kicking the ball directly into the goal. The opponent must be 10 yards back from the ball on a corner. A kicker is not allowed to play again until the ball is touched by another player.