Description and Brief History of Basketball 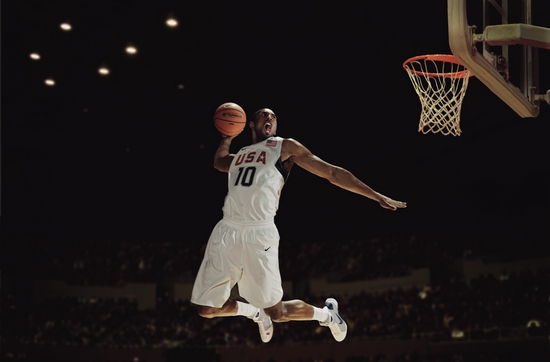 Basketball is the most popular sport played indoors in the US. History of basketball is not so long. It was invented in 1891 in Springfield, Massachusetts, by Dr James Naismith. He used fruit baskets for the hoops and baskets, and a soccer ball. The first professional organization for male players was established in 1898, and the NBA (National Basketball Association) was set up in 1949. Games are now played by rich basketball stars before huge audiences. The team seen most outside the US is the Harlem Globetrotters. It is mainly an indoor sport but it is also played with just as much enthusiasm by young people on the streets of US cities. Basketball is played by two teams of five players, but seven other players can be brought on to replace them during the game.

The court is up to 94 feet/29.7 meters long and 50 feet/15 meters wide. At each end is a hoop (= a metal ring) 10 feet/3 meters above the floor. The hoop is attached to a backboard and has a net without a bottom hanging from it. A regulation basketball hoop consists of a rim 18 inches (46 cm) in diameter and 10 feet (3.0 m) high mounted to a backboard

In the beginning, Basketball was played with soccer ball. The first ball made specifically for basketball was brown in color. In the late 1950s Tony Hinkle introduced the orange ball, which is more visible to players and spectators alike. The size of the basketball is also regulated. For men, the official ball is 29.5 inches in circumference (size 7, or a “295 ball”) and weighs 22 oz. If women are playing, the official basketball size is 28.5 inches in circumference (size 6, or a “285 ball”) with a weight of 20 oz.

Players score two points when they throw the ball through the hoop from an area near the basket, and three points if they are further away. The team that scores the most points wins. The most exciting score is a slam dunk when a tall player jumps up high and pushes the ball down through the hoop. The ball is moved between players by a pass, or a dribble if a player bounces it on the floor. Dribbling was not part of the original game except for the “bounce pass” to teammates. Passing the ball was the primary means of ball movement. Dribbling was eventually introduced but limited by the asymmetric shape of early balls. Dribbling only became a major part of the game around the 1950s, as manufacturing improved the ball shape

An attempt to unfairly disadvantage an opponent through physical contact is illegal and is called a foul. Players are not allowed to push an opponent, but this often happens. When a foul is committed against a player, he or she can have one or two free throws, also called foul shots that count one point each. If the referee calls five illegal plays on a player, he or she fouls out and cannot play the rest of the game.