Real Madrid Striker Cristiano Ronaldo has been presented with the European Golden Shoe for his exploits in 2014-15 on Tuesday.  During last season Ronaldo scored 48 goals in 35 games. He has received record 4th golden boot award and 3rd with the world’s richest club Real Madrid. After receiving golden shoe award Cristiano Ronaldo told the media about his feelings. 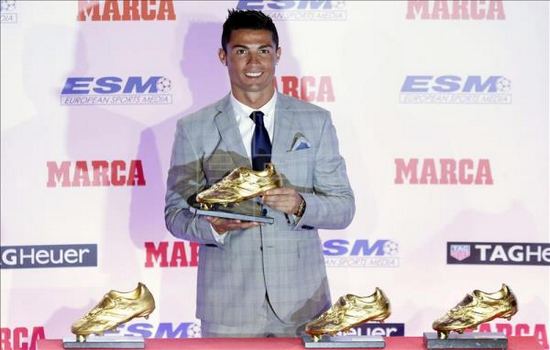 “I always want more. I know I am the only one to have four but I want more.

“That implies winning trophies with the world’s greatest club. This year will be no different and we want to win La Liga, the Cup and the Champions League. I hope we see each other again next year.”

On this occasion Real Madrid released the video of Cristiano Ronaldo’s all 48 goals in La Liga 2014/15.

Here is the video of Cristiano Ronaldo’s all 48 goals in La Liga 2014/15 released by Real Madrid.