The summer season is about to get warmer as football fever stirs up again. Venue is different so is the player’s gender category but the incentive and spirit is same as for Brazil in 2014. Scheduled in Canada from 6th of June 2015, the tournament will be the seventh of its type. Apart from being crowned as world champion in women football world at the end, the top three teams will also qualify for Summer Olympics 2016. Speaking of the stats in football World Cups at feminine side, there might not be players of Messi or Ronaldo’s caliber still the area is full with some remarkable talents. FIFA Women’s World Cup top scorers crown is owned by Brazilian No. 10 jersey Marta Vieira da Silva. Having scored 14 goals along with German Birgit Prinz, Marta will be the center of hopes for Brazil in World Cup 2015. The complete list of FIFA Women’s World Cup Top Scorers is as follows; 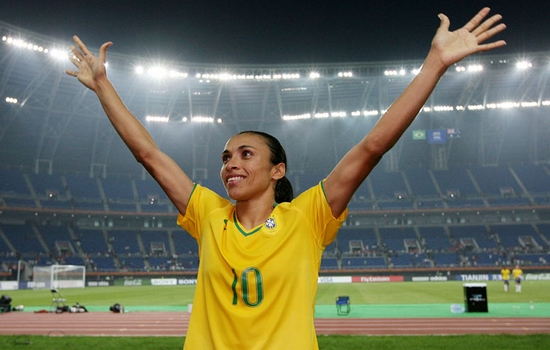 Brigit Prinz stands on a little less spot from top in FIFA Women’s World Cup top scorers list as she has played more number of tournaments than Marta. She however is the most successful player in all, having participated in five World Cups and winning twice for her country.