FIFA World Cup Trophy: The Most Prestigious and Most Expensive Trophy

The FIFA World Cup Trophy is the most prestigious and most expensive trophy in the world. It has become the most sought after and most recognized sports prize in the world and can truly claim universality unique to the sport of football.
Since the advent of the football World Cup in 1930, two trophies have represented victory: the Jules Rimet Trophy from 1930 to 1970, and the FIFA World Cup Trophy from 1974 to the present day. 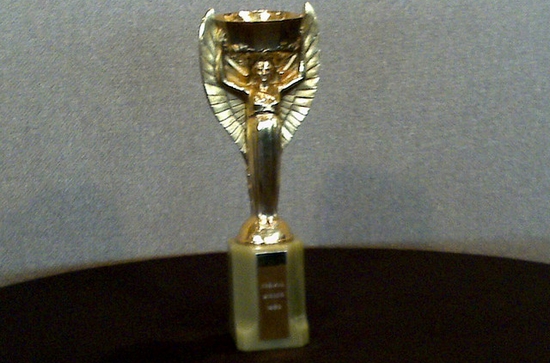 FIFA World cup trophy, originally named Victory, but later renamed in honor of former FIFA president Jules Rimet, was made of gold plated sterling silver and lapis lazuli. Designed by Abel Lafleur and made of gold plated sterling silver on a white/yellow marble base. Since 1958 this base has been replaced with a high base made of lapis lazuli, it stood 35 centimeters (14 in) high and weighed 3.8 kilograms (8.4 lb). It comprised a decagonal cup, supported by a winged figure representing Nike, the ancient Greek goddess of victory. Brazil won the trophy outright in 1970, prompting the commissioning of a replacement. In 1983 this most prestigious and most expensive trophy “The Jules Rimet Trophy” was stolen and never recovered.

FIFA World Cup Trophy: The Most Prestigious and Most Expensive Trophy

The subsequent trophy, called “FIFA World Cup Trophy”, was introduced in 1974 The FIFA World Cup Trophy is 36.8 cm (14.5 inches) high, 6,175 g (13.61 pounds) heavy, and made of 18-carat gold. The base contains two layers of semi-precious malachite while the bottom side of, it depicts two human figures holding up the Earth. The Trophy bears the engraved year and name of each FIFA World Cup winner since 1974. It the time of design the trophy cost about US$50,000. In 2010, the trophy is worth over US$10 million in. Today, the worth of this trophy is about $20 million. FIFA’s regulations now state that the trophy, unlike its predecessor, cannot be won outright: the winners of the tournament receive a replica which is gold plated rather than solid gold.