The biggest match of ICC Cricket World Cup 2015 will be played between arch-rivals India and Pakistan on Sunday February 15th at the Adelaide Oval in Australia. This is sixth time in the history of mega event when both rivals are head to head. They previously collided in 1992, 1996, 1999, 2003 and 2011. The statistical analysis revealed that Pakistan have never won from India in ICC mega event. Overall analysis also indicates that Pakistan is far ahead in ODIs victories from India. Definitely, none of them wants to loss that crucial game. India would like to continuous the streak by repeating the history. Other the other hand Pakistan will try to change the history. Before the epic competition let’s take a look at statistical analysis of India vs Pakistan in ODIs. 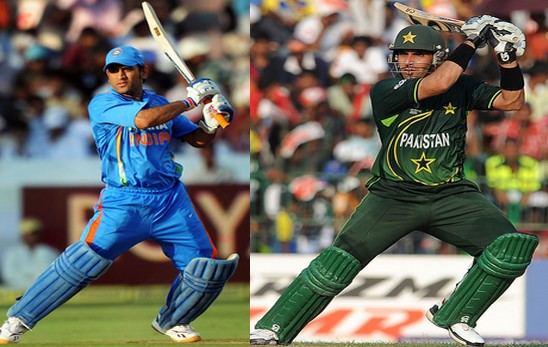 India have 100% winning percentage in ICC cricket world cups. But in overall ODI competitions the winning percentage of India is just 37%. Total 126 matches are played between both rivals so for. Out of 126 Pakistan have won 72 and blue shirts won 50 matches while four matches ended without any result.

Saeed Anwar has a record of highest individual score in all competitions between Pakistan and India. He scored 194 runs against India in Chennai.

Similarly Sachin Tendulkar and Soloman Butt shared the record of most 100s in all competitions with five centuries each.

The legendary Pakistani fast-bowler Wasim Akram holds the record of highest wickets with 60 wickets in all competitions between two opponents.

Aqib Javid of Pakistan holds the best bowling figures in all competitions between India and Pakistan. He has taken 7 wickets in 10 overs in Sharjah.

In wicket-keeping records once again Pakistan is on top. Moin Khan is the man with most dismissals. Similarly in fielding and catching records Indian are dominant.

Mohammad Azharuddin with 44 catches is just ahead to Shahid Khan Afridi; who has taken 30 catches.

India have the record to score highest and lowest totals. Highest total is 356 runs while lowest is 79 runs.

India vs Pakistan: Man of the Match Awards