The MMA fighter Ronda Rousey is the most dominant athlete in the world. She is a top pay-per-view draw for UFC and action movie sensation, has now taken her talents to print.

Ronda Rousey made history and shared Saturday that she is now the first woman to grace the cover of ‘Men’s Fitness,’ as she will be featured on the magazine’s Australian edition. 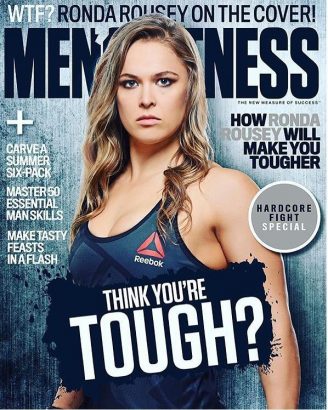 Rousey will defend her title against former world champion boxer Holly Holm in front of the largest crowd in UFC history in Melbourne on Saturday, Nov. 14.  The match between Ronda Rousey (12-0 MMA, 7-0 UFC) and Holly Holm (9-0 MMA, 2-0 UFC) for the UFC Women’s Bantamweight Championship.

According to UFC president Dana White, there are more than 40,000 tickets already sold for the upcoming event with six weeks still to go until fight time.

Rousey’s latest media tour in Australia only increased her visibility there and this new magazine cover that’s set for release this Thursday should only prove to multiply her popularity.