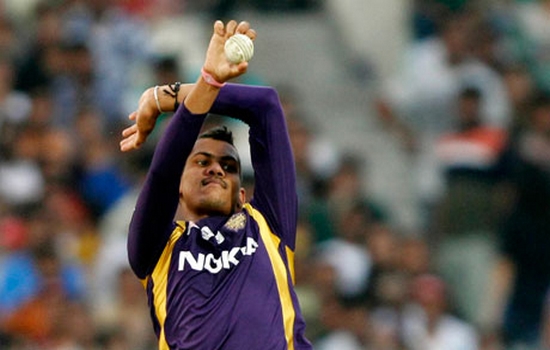 Bad news for KKR  and cricket fans ; West Indies spinner Sunil Narine will not bowled in up-coming Champions league T-20 final.  Sunil Narine has been reported for a suspect action a second time in the CL T-20 and so, he cannot bowl in Saturday’s final. In first semifinal he has been reported for his suspected bowling action second time in the event. Narine played vital role in the success of his team to qualify the final of the tournament that’ll be played on Saturday. KKR will miss the services of leading wicket taker Sunil Narine.

Before this he was also for a suspected illegal bowling action during tonight’s Oppo Champions League Twenty20 game against the Dolphins at Rajiv Gandhi Stadium, Hyderabad.

According to reports he has been banned to bowl in rest of the champions’ league tournament.

Before this Pakistan’s off-spinner Saeed Ajmal already suspended from bowling in competitive cricket. In this tournament, two Lahore Lions bowlers Adnan Rasool and Mohammed Hafeez have been reported for suspect actions.