Referees are the law keepers of the game of football. Referees are very respected on the pitch as the control the game. If a referee gets a bad day in a football match, it can be horrible for the outcome of the game. Europe is the apex of world football and the games are largely dependent on referees. Technology is taking more aspects of refereeing nowadays but the best referees are still showing their great performances.

Who is a referee?
A referee is the person of authority in a variety of sports who is responsible for presiding over the game from a neutral point of view and making on the fly decisions that enforce the rules of the sport, including sportsmanship decisions such as sendoffs.

In this article SportsGoogly will take a look at the most celebrated referees of our time. This is the top 10 referees. 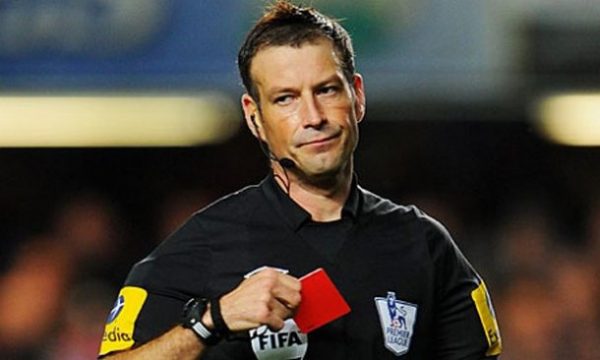 Mark Clattenburg is a professional English referee who officiates for in the English premier league. Clattenburg was listed by FIFA in 2006 two years after turning professional. He was born on 13 March 1975 in Durham County, England. The year 2016 have not ended yet but Mark Clattenburg have achieved a lot of successes by officiating the UEFA champions league, FA cup finals and Euro 2016 finals.
Mark Clattenburg started his education at the Cramlington Community High School and continued to South Northumberland school.

In 2004 Mark Clattenburg turned into a professional football referee. He started officiating in the premier league since then he have officiated a lot of  high level matches.

Clattenburg was selected as the referee of the 2016 UEFA Champions League final between Real Madrid and Atlético Madrid in Milan on 28 May. Real Madrid went on to win the match 5-3 after extra time and penalties. He went on to referee the UEFA Euro 2016 Final between Portugal and France on 10 July, which Portugal went on to win 1–0 after extra time. Clattenburg referred the 2016 FA Cup Final, contested by Crystal Palace and Manchester United. The match went to extra-time and Manchester United won by a scoreline of 2-1.

Since turning professional in 2004 Clattenburg have officiated 424 matches and have shown 1380 yellow cards and 66 red cards. The statistics shows that Mark Clattenburg shows 3 yellow cards per game.

Nicola Rizzoli started his refereeing in the Serie C as a center referee. He officiated in the Serie C from 1998 to 2001. In 2001 he was promoted to the Serie B as a center referee until 2003. Rizzoli was listed by FIFA in 2007 as a international referee. Rizzoli is part of UEFA elite referees and have officiated a lot of high profile matches including the FIFA 2014 world cup. So far Nicola Rizzoli have officiated 436 matches and have shown 1971 yellow cards and have made 124 send offs.

Martin Atkinson was born on born 31 March 1971 in Bradford, England. Atkinson is a professional referee who officiates in the English Premier League and was list by FIFA in 2006. Atkinson started his refereeing career in the Football league from 1998 to 2000 as an assistant referee. In2000 he was promoted to the officiate games in the English Premier League as an assistant referee.  In 2005 Martin Atkinson was appointed a full time premier league referee. One year after his appointment, Atkinson was listed by FIFA to officiate international games.

Kassai Viktor was born on born 10 September 1975 in Tatabánya, Hungary. Kassai stared his refereeing career in 1990 and he was promoted to officiate league matches in 2003.  Viktor Kassai was listed by FIFA as an international referee in 2003. Viktor Kassai is part of the UEFA Elite referees. Viktor Kassai officiated games in Olympic Games 2008, FIFA World Cup 2010, UEFA Euro 2012 and UEFA Euro 2016.

Viktor Kassai have officiated 363 competetive games and have shown 1618 yellow cards with 80 red cards and have awarded 125 penalties so far. This season, Viktor Kassai have officiated five games including 3 internationals which involved the opening champions league game between PSG and Arsenal. The 41 year old Hungarian is one of UEFA’s best referees in Europe currently.

Felix Brych was born on born 3 August 1975 in Munich, Germany. Brych is a doctor of law in sports and he is a lawyer by profession. He started his refereeing career in 1999 in the DFB and got promoted to the Bundesliga 2 in 2001 as a center referee. Felix Brych made his first Bundesliga appearance in 28 August, 2004 and he was listed by FIFA as an international referee in 2007. So far Brych have officiated in 215 Bundesliga games with 749 yellow cards and 43 red cards. Brych is part of UEFA elite referees and he participated in the 2013 FIFA confederations cup, 2014 FIFA world cup and Euro 2016.

Dr. Brych have officiated 562 games as a professional referee and have shown 2020 yellow cards with 127 send offs and have awarded 178 penalties. The 41 year old referee is well noted for his distribution of cards, his records demonstrates that per any champions league he shows four yellow cards. Brych is Germany’s number one referee only he and referee Deniz Aytekin are the only German referees among the UEFA elite referees.

Cuneyt Cakir participated in the FIFA Under 20 World Cup 2013, Euro 2012, FIFA World Cup 2014, Olympic Games 2016 and Euro 2016. Since the 39 year old Turkish elite referee turned into a professional referee, he have officiated 364 games and have shown 1551 yellow cards with 118 send offs and awarding 114 penalties. Though Cakir have not officiated any UEFA game this season but as a elite referee in Europe he promise a lot of champions league actions this season.

Bjorn Kuipers was born on 28 March 1973 in Oldenzaal, Netherland. Kuipers drawn inspiration from his father who was an amateur referee to go professional. He studied business administration at Radboud University Nijmegen. Kuippers owns a lot of business in his home town as a businessman. In 2002 he started officiating in the second tier division and in 5 March 2005 he made his debut in the Eredivisie. Kuipers was listed by FIFA in 2006 as an international referee and he became an UEFA elite referee in 2009.
Kuipers is one of UEFA’s best referees right now. He have officiated three international matches already this season, which are;

Kuipers have officiated 408 games as a professional referee and have shown 1391 yellow cards with 72 red cards and 100 penalties awarded. Kuipers is currently the best referee in Netherland.

Jonas Eriksson was born on born 28 March 1974 in Luleå, Sweden.Jonas Eriksson is reported to be a multi-millionaire in Sweden. He started his officiating career in 1994 and in 1998 he became a professional referee. Eriksson made his league debut in 30 December 2001. Eriksson was listed by FIFA as an international referee in 2002. He is the only referee from Sweden to be a member of the UEFA elite referees.

Since turning professional, Eriksson have officiated 333 games and have shown 991 yellow cards with 46 red cards and 56 penalties awarded. Eriksson have not officiated any game this season but is one of Europe’s senior referees.

Gianluca Rocchi was born on 25 August 1973 in Florence, Italy.  Rocchi started his refereeing career in 2000 and in 2003 was promoted to the Serie B from the Serie C after he officiated 38 matches. On 16 May 2004 he made his serie A debut and was listed by FIFA as an international referee in 2008. Rocchi is a member of the UEFA elite referees. Recently he officiated the champions league game between Tothenham  and Monaco. Rocchi is one of the best referees in Europe.

Rocchi have officiated 373 games as a professional referee and have shown 1800 yellow cards with 162 send offs with 155 penalties awarded. As the records suggest, Gianluca Rocchi is a no nonsense referee and shows 5 yellow cards per game. He is a elite referee in Europe despite the fact that he have never attended any FIFA international senior competition.

This are the top 10 referees in Europe for 2016 but if you think otherwise or feel that someone is left out, feel free to comment about it. This is the top 10 but let’s vote to select one referee to whom you think is the most celebrated.

Take your votes now by commenting.