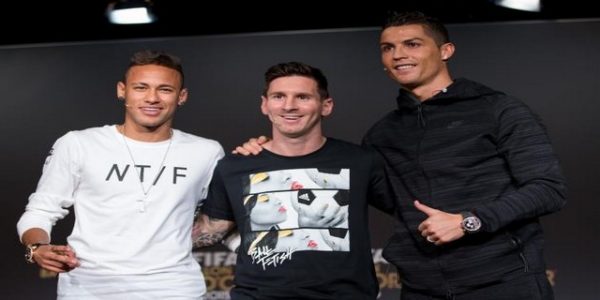 Neymar has turned recent rumors of a move to Real Madrid on their head, admitting that he would prefer Real star Cristiano Ronaldo to join him, Lionel Messi and Luis Suarez at Barcelona. All these four stars are in race of la liga top goal scorer season 2015-16.

He told the Portuguese outlet: “I’m a fan of Cristiano; he’s a legend, one of a kind. It would be very good if he played for Barcelona,” before the line of questioning switched to the 24-year-old’s opinions on a number of top coaches.

With former Barcelona boss Pep Guardiola joining Manchester City from the end of the season and highly-regarded Jose Mourinho reportedly close to a move to Manchester United, Neymar was asked if either could convince him to move to the Premier League.

His answer was diplomatic, saying: “I admire them both, I’ve been following both of their paths for some time. But my coach is Luis Enrique and I defend Barcelona.”

Neymar Jr continued to discuss his current team and teammates, claiming: “I think the team is not only this trident, we can be considered one of the best in history. I love playing with my team-mates and I feel very proud to be part of this team. It’s difficult (to defend the Champion league ) there are great teams, as good as Barcelona. I can only guarantee that we won’t lack the determination to try.”