The first test match of the 2016 played between 2 great teams of the world. 2nd Test match of the Basil D’Oliveira Trophy Played at Newlands, Cape Town was do and die for the hosts as the lost the first test match quite miserably by 241 runs. After a chastening defeat in the Boxing Day Test at Durban, they are faced with the inevitability of a changing of the guard, with Dale Steyn already ruled out of the contest who was replaced by Kagiso Rabada. 2 other changes include Quinton De Kock and Chris Morris who came to the side in place of Kyle Abbott and J P duminy. And on the other hand England had a good news with James Anderson back in the side. England won the toss and decided to bat first on a batting friendly wicket. You can watch live stream of this match on ptv sports in Pakistan and ten sports in the India. 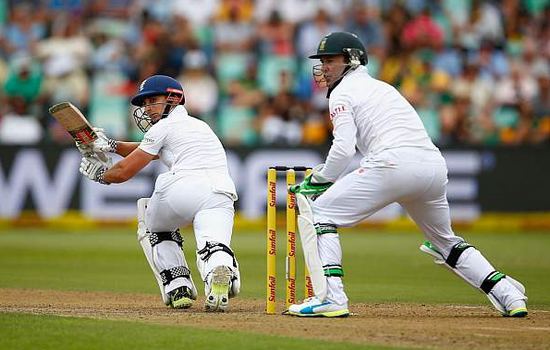 England openers gave a decent start to their team with a 55 run stand and played quite decently until Morris took a blinder by diving low to his left at 3rd slip. With such a tremendous catch the innings of Alastair Cook ended. He scored 27 runs and wicket taker was Rabada. After the wicket England played steadily and quite decently with a 74 runs Partnership between Alex Hales and Nick Compton. Alex Hales scored his maiden test fifty and scored 60 runs with 10 fours. He got out with an outside edge when de Villiers took a good catch in the slip. Soon Hashim Amla used his young fast bowler Kagiso Rabada and he bowled 2 brilliant deliveries to dismissed Nick Compton and James Taylor. Compton scored 45 and James Taylor scored a golden duck.

The two wickets from Kagiso Rabada put the host right back in the match but then some sensible batting from Joe Root and Ben strokes put England again on the driving seat and a 54 runs stand between the two ended when the debutant Chris Morris took first wicket of his career by dismissing Joe root behind the wicket. That was the last wicket of the day fell. After that Johnny Bairstow joined Ben Strokes and a fine unbeatable partnership of 94 runs made the day for England. Ben Stokes took on the new ball to bring up a valuable half-century At the end of the day England was 317-5 with Ben strokes batting on 74 and Johnny Bairstow on 39. Kagiso Rabada took 3 wickets and was the only bowler who made impact and helped Africa to put back in the match. Morkel and Morris took 1 wicket each. Now it’s all set for the Day 2 of the match and Africans really have to work hard to get back into the match.