Human beings have been swimming for millennia. According to Wikipedia, Stone Age cave drawings illustrate individuals swimming and there are written references in the Bible and the Greek poems dating back 1,500 to 2,000 years. Today swimming is one of the second most popular exercise activities in the world apart from that it has grown as a competitive sport. Competitive swimming continued to grow in popularity during the 1800s and was included in the first modern Olympic Games in Athens in 1896. Now it has become undoubtedly the most popular Olympic game. Top 10 Olympic Medalists in swimming till now are revealed here. 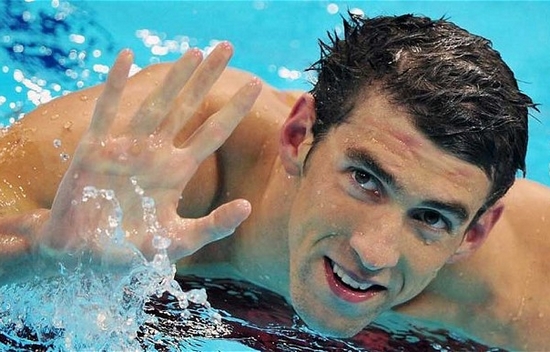 The American swimming sensation Michael Phelps is at top position in Top 10 Olympic Medalists in Swimming (Men). He is the most decorated Olympian of all times with a total of 28 medals. He also holds the all-time records of Olympic medals (23) Olympic gold medals in individual events (12) and Olympic medals in individual events for men (13). Phelps started his Olympic journey at 2004 Athens Olympics where he won six gold medals. In his first event, the 400-meter individual medley, Phelps won with a world record time of 4:08.26 to win his first Olympic gold medal. In 2008 Beijing Games, he repeated the history and won 8 gold medals by claiming his first title in the 400m. In 2012 London Olympics, Phelps won four gold and two silver medals and became the most successful athlete of the Games for the third Olympics in a row.

At Rio Olympics 2016, Michael Phelps won his 13th individual gold and broke 2100 years ancient record. He also brought his medal tally to 26 medals more than any athlete in the history of Olympics.The 200-meter individual medley field was chasing Michael Phelps, who powered past Leonidas of Rhodes.

Leonidas won 12 individual events over four Olympics. At 36, five years older than Phelps, he won his last three golds in 152 B.C, in races of about 200 and 400 meters and in a shield-carrying race. Phelps surpassed Leonidas, winning his 13th individual gold. With the victory, Phelps also joined the track and field Olympians Al Oerter and Carl Lewis as the only Americans to win an individual event four times. 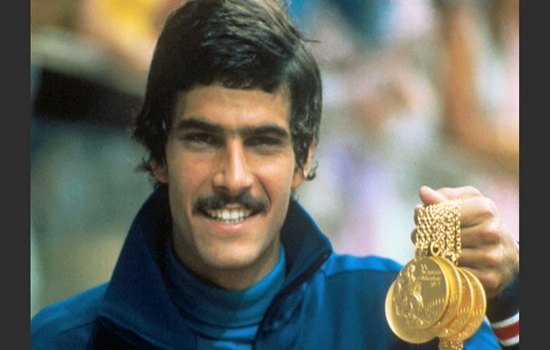 9-time Olympic champion, former world record holder, American farmer swimmer Mark Spitz is at 2nd position in top 10 Olympic Medalists in Swimming (Men). He has won a total of 11 medals in Olympics games, including nine gold, 1 silver and 1 bronze medal. Spitz Olympic history starched back to 1968 Mexico City, where he won two gold, 1-silver and 1 bronze medal in men’s swimming. He won 7 gold medals in 1972 Olympics at Munch and became the most decorated athlete in the history of Olympics. The record was suppressed by Michael Phelps in 2008 Beijing Olympics by wining 8 gold medals. 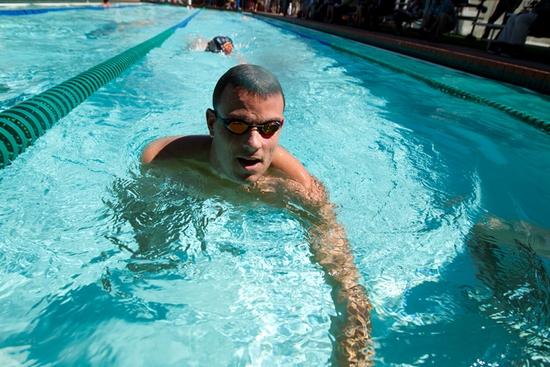 Former American swimmer Matt Biondi collectively won 11 medals in different Olympics games. Medals included eight gold, two silvers and one bronze medal. He competed in the Summer Olympic Games in 1984, 1988 and 1992. In 1984 Olympic Games he won only one gold medal in the 4 x 100 meter freestyle relay Biondi won five gold medals, one silver medal, and one bronze medal in the 1988 Olympics, breaking the world records in four of those victories. At the 1992 Olympics in Barcelona, he won two more gold medals in relays and a silver medal in the 50 meter freestyle. 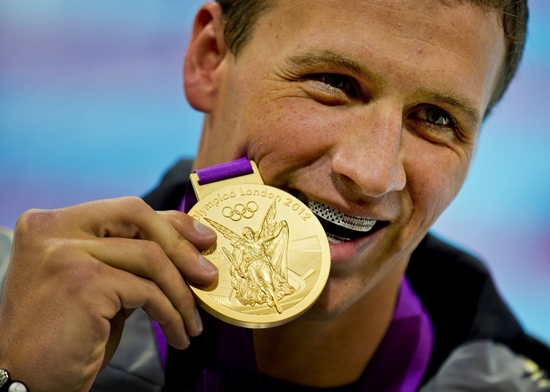 At no 4 position in the list of top 10 Olympic Medalists in Swimming we have Ryan Lochte with 11 medals, five gold, three silver and three bronze. Ryan has been named both American and World Swimmer of the Year twice in his career (2010 & 2011) and has a total of 70 medals in major international competition including 45 first place finishes. 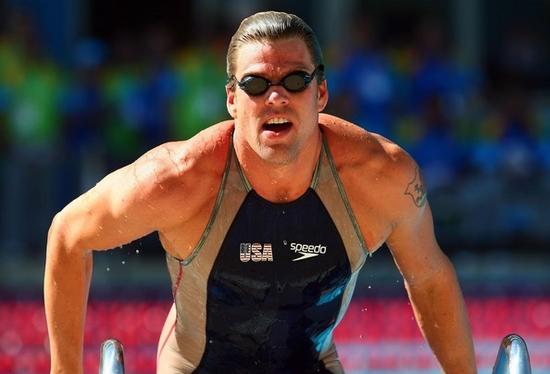 American swimmer who competed in the 1996, 2000, and 2004 Olympics.  After a serving a short suspension for marijuana in 1998, he finally won an individual international title at the Sydney Olympics. Tying with his teammate Anthony Ervin, he won gold in the 50 m freestyle. He surprisingly retained his title in Athens, making for a total of 10 Olympic medals, including five gold. 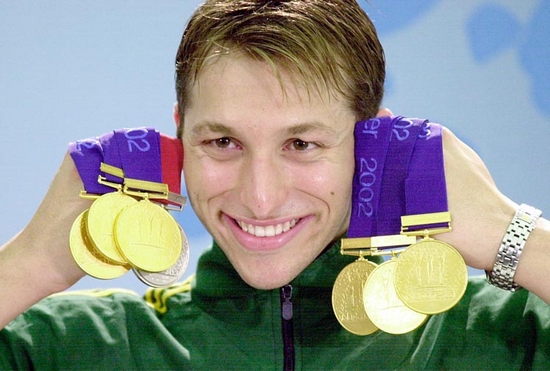 Australian swimmer who is major in in freestyle, but also competes in backstroke and the individual variety. He has won five Olympic gold medals, the most won by any Australian, and with three gold and two silver medals, was the most successful athlete at the 2000 Summer Olympics. 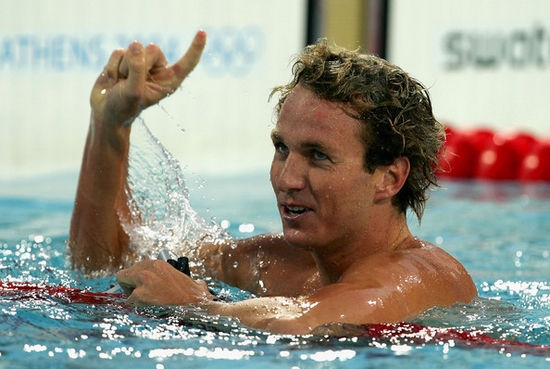 Born on 23 July 1983 in Irvine, California, Aaron Peirsol was only 15 when he became the youngest American swimmer in history to break the two-minute mark in the 200m backstroke. Announcing his competitive retirement in early 2011, Peirsol is now devoting his energies to take protective measures for the oceans. 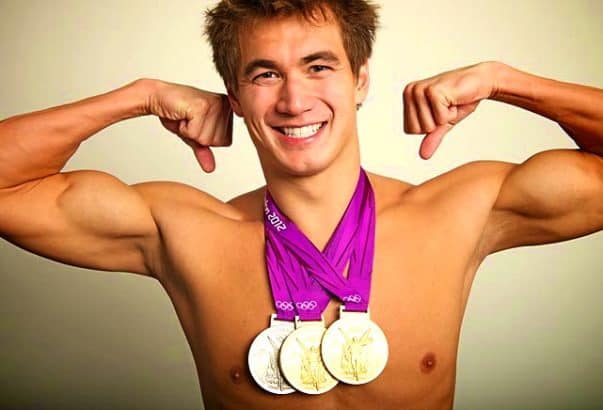 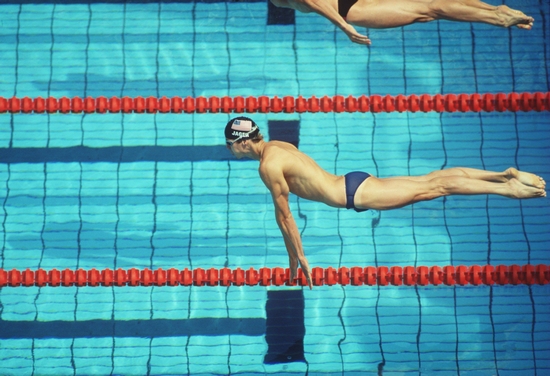 No. 8th in the list of Top 10 Olympic Medalists in Swimming Tom Jager was a pure sprinter, specializing in the 50 free, at which he set six world records. Tom Jager won seven Olympic swimming medals and five gold medals. All of his golds came in relays. His individual medals were a silver in the 1988 50 meter freestyle and bronze in the 1992 50 meter freestyle. 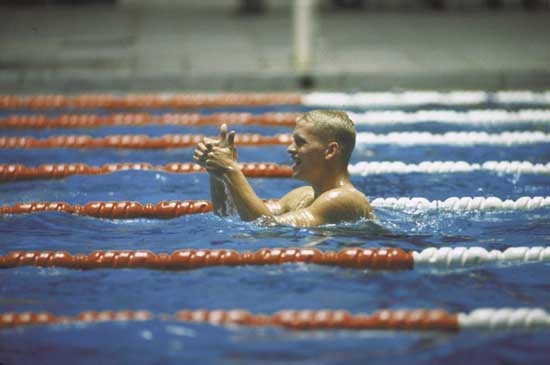 The most successful athlete at the 1964 Olympics Donald Arthur Schollander won a total of five gold medals and one silver medal at the 1964 and 1968 Summer Olympics. Schollander was one of eight Yale swimmers to claim Olympic gold in the 20 years between 1948 and 1968. 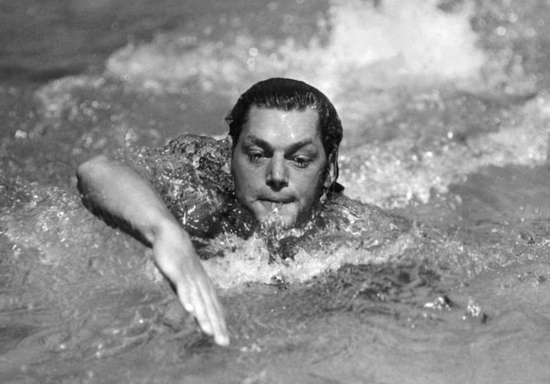 Although Johnny Weissmuller has not won many medals and is at the bottom of Top 10 Olympic Medalists in swimming but in fact no one has ever came close to a winning streak like Weissmuller’s. Tarzan the Ape Man’s leading actor never lost a race in 10 years of competition swimming. Johnny broke world records for fun his coach had promised to buy him lunch when he broke a record, so Johnny started shaving off a few hundredths here, a tenth there, always making sure there was more in the tank for next time he was hungry. By the time he retired, he had broken 67 world records officially.